When Your Journey is Interrupted 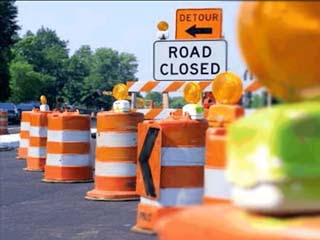 DELAYS MAY TAKE LONGER THAN EXPECTED

I really don't like detours when I'm trying to get somewhere - do you?

For one, I think it is the uncertainty that I will actually be able to maneuver through the detour route and still get where it is that I want to go.

And, secondly, it is simply an interruption to my planned path on my journey and I just don't like it to change unexpectedly like that!

It's especially hard when this detour is not on a trip traveled in an automobile or some other mode of transportation, but it's a detour in your planned journey (path) for your life!

I've talked about this before in past blogs and podcasts. As a matter of fact, I've done several little "mini-series" on this topic off and on over the history of this blog - just go back through and see what you can find.

But, you know what? It's TOUGH to live it, isn't it? Yeah, you know, the old, "Easier said than done" scenario.

Many of you know that I lost my job back mid-August of 2010. Purely unexpected but, at the same time, not unwelcomed. I was already trying to "plan a route" to where I could do so financially while I pursued my dream of my seminars with my "Future You University" concept.

Well, here I am now at the end of July 2011 and not a whole lot has changed. Oh, I have made attempts to get my seminar started but, quite honestly, it was ill-timed and I was not financially prepared to do it in the way I had planned. Too, other opportunities that I have looked at to try to see us through in the mean time just hasn't worked out. I am starting a new "job" but it will likely be another month before I see any income from it which is not good news right now.

Because of all of this, I stopped doing my podcast after losing my job last August because I didn't know where I was going to be and when and I knew I wouldn't be able to keep up with my daily schedule like before. I began it again earlier this year more for me than anything but discontinued it again because, quite honestly, I was having a hard time keeping MY OWN mental attitude where it needed to be.

Don't be! I don't think you'll ever find any situation (podcast or blog) where I said keeping a positive attitude even through tough times would be easy. Never. It's NOT!

But, I still have a choice. Give in, give up or GET UP and KEEP MOVING forward even though my path/journey has been redirected due to a detour.

Still easier said than done for sure.

So, I'm struggling big time! Financially, I'm lower than a pregnant ant's belly! And, on some days, the same can be said of my mental attitude. Yeah, that's right - I'm human.

Believe me, there have been days where I felt like giving up and, honestly, there are days that I DID give up temporarily.

That's the key. Make any such situations a TEMPORARY one.

Yes, I WILL still have my seminars but it will be later than I had planned since I had planned to be well involved in them at this point. But, I will continue on that path REGARDLESS of any detours that continue to come my way.

So, I encourage you to do the same. REGARDLESS.

And, as you go along this detoured path...