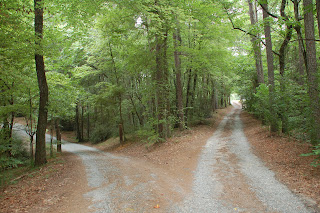 How would YOU complete that statement?

Would you, like many, end it by stating that the path taken today will determine your future?

If you were to state such, would you be talking about your "long-term" future or just your "immediate" future?

This is going to be short and to the point so stay focused and pay attention to what I'm actually saying here, o.k.?

I'll give a nod to the fact that the path taken today may determine your immediate future but there is no way in the world that I'd even give a hint of a nod to the idea that it determines your long-term future.

How discouraging and depressing it would be (and IS for many that fall into this "often promoted yet WRONG" thought process) to think that once you've made a mistake your future is doomed because of that mistake.

Should we be careful in our choices? Sure.

Think about that for a moment.

Simple analogy - if you take a wrong turn on a trip are you DESTINED to stay on that route and continue down a wrong direction? Uh, NO.

So, for one, you can turn around and correct this wrong decision by going back to where you made a wrong turn and correcting that mistake by then taking the RIGHT path. Right?

Here's another analogy that you may relate to... have you ever taken a wrong turn and had your GPS constantly remind you to turn around? But have you also had your GPS refigure directions based on the direction you are going (even if it IS wrong based on the original mapping) and allow you to get "back on the right path"? I have on several occasions.

So, secondly, once you realize you are on the wrong path you still have the ability to make a few adjustments and get back on track to reach your original destination even if it IS not the same path you meant or intended to take in the beginning. (By the way, this could also be called a "detour").

THAT, my friends, would be idiotic.

Stay on track, friend and, as you go along this journey always be sure to...

Posted by mspillman at 7:16 PM No comments: