Wow, It's Been Longer Than I Thought 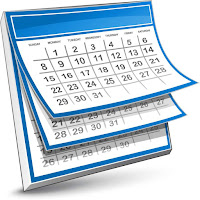 I knew I hadn't done a blog article in a bit but didn't realize that it's been almost a month! My apologies for being away longer than I had planned.

A lot of things have taken place during this period of time, which had SOME influence on the length of my absence.

My youngest son had just gotten married a few days before that last article. Then, earlier this month my two oldest sons were both deployed to serve in a foreign land. So, yeah, a LOT of changes have taken place over the past few weeks.

And, on top of all of that, my wife and I have begun a new business venture.

How often do you find yourself realizing that, "Wow, it's been longer than I thought!" ?

Are you kids growing up too fast? Are you having a hard time believing that they will be in ____ grade in school this year? Or that they have already been married for ____ years?  Or that they already have children of their own?

Maybe you've realized that more time than you wanted has passed since you decided to do something different with your life. Know what I mean? Maybe it was back at the start of the year when you, along with millions of others, made one of those "New Year's Resolutions".

And, now, the year is already MORE than half over.

Here's the thing...time passes and things happen. Changes take place in our life, both good and bad or, at least, things we would prefer NOT to change. Or at least not as quickly.

But they do anyway. And time still passes. Days come and go and, before we realize it, those days have turned into weeks, months and even years.

If you've been with me long enough then you know that I have often talked about the fact that, all we really have is TODAY.  We can't go back...that 24 hour period that we call "yesterday" is gone and can never be reclaimed. The 24 hour period that we call "tomorrow" has not yet arrived and, just to be blunt, it may not ever arrive. So, when you really look at it, all we have is TODAY...right now!

It's here right before you. Now.

And yeah, what you do with it DOES matter.

So, until next time, whatever you do...

Future You University   FYU on Facebook!   Podcast on iTunes   Podcast RSS feed
Posted by mspillman at 12:24 AM No comments: