Taking That NEXT Step! 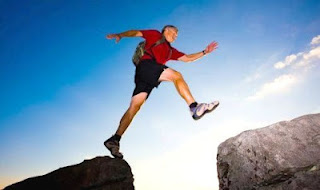 Sometimes that "next step" can be the hardest to take. True or False? I guess it really depends on what that next step is, right?

Just getting straight to the point here - whatever that "next step" is for you, if you never take it you will never get where you are going.

Pretty simple. But, again, don't forget that many times the profound can be found in the simple.

That "next step" may actually be considered your FIRST step toward whatever it is you plan to achieve but, then again, is it actually your first step? (Whoa, dude...you're going to short-circuit my brain!)

Think about it - what IS the first step in ANY process that you are considering?

If THAT was not the "next step" then what happened after that? Did you decide to talk to someone else about it or do some research on-line or at the library to find out more about this thought? Wouldn't THAT be a "next step"?

At what point does the "next step" become a step that we are afraid to take?

Granted, it's EASY to THINK about doing something. Yet, some people that I have met during my life have actually been afraid to allow themselves to even THINK about the possibility of following a dream, thought or idea.

Thinking and doing are two different courses of action, wouldn't you agree? For most (at least from my experience) it would seem that taking the step from THINKING and TALKING about doing something and actually beginning to DO IT is the "next BIG step" that causes so many of us to freeze in our tracks.

Remember what I said earlier? "...whatever that "next step" is for you, if you never take it you will never get where you are going."

Believe me, I understand that hesitation and the reality that FEAR freezes us and causes us to cease following our dreams any further.

So, what about YOU? What's YOUR "next step"?

We're all in this together, remember?

Be sure to check out and become a member of our Future You University fan page on Facebook at: www.facebook.com/futureyouuniversity

I'd really love to get your feedback and thoughts there if you would. Until next time, whatever you do, be sure to...

Mike
Posted by mspillman at 8:15 PM No comments: