THE COST OF COMMITMENT 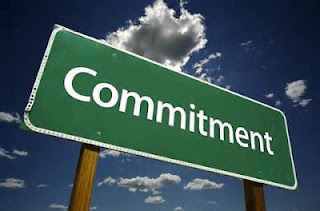 
"The Cost of Commitment"
Recently I did a video-cast on this topic and I invite you to take a look at it here so that you can get more thoughts on the topic that I will be discussing in today's article. I hope that you will be challenged, encouraged and inspired to keep moving toward your goals and dreams through these thoughts.
It's summertime in Arkansas and, like many communities across our nation, the little town in which we live will be having their own festival later on this month. It's been a yearly event for many years now and, from what I understand, it has also declined in popularity and attractiveness overall. This year many of this town's leaders decided to step up and put a rededicated emphasis on the event in order to improve the event. Bottom line, here was the choice: watch it die or do whatever it takes to revive it.
What about your goals and dreams? You, too, have a choice (especially if it has been  a while since you have made any progress in this pursuit): will you let your dreams die or will you do whatever it takes to revive them?
The city here had committed to $20,000 to go toward the building of the stage for a top-notch music act that had been scheduled for the event. Other businesses in town had also committed to make this stage a reality. It's always a powerful thing to see when groups of individuals or businesses come together with a common goal to make something happen.
However, those who had originally put the numbers together found that - as often seems to be the case - there figures were actually incorrect and that the city would need to double their commitment to $40,000 in order to make this possible.
The city has a choice to make. They actually had several choices before them:
1. Cancel the commitment altogether and walk away. If this would be the choice, would the original commitment be completed? NO!
2. Stick to the original commitment and not contribute any more. The city would be within their rights by making this choice, right? They would be sticking to their original commitment and it's not their problem that someone else messed up the numbers. However, if this would be the choice, would the original commitment be completed? NO!
3. Stick to commitment to see this through regardless of the cost. And this is exactly what the city decided to do. They decided to find a way to put up the extra money so that the original commitment could be fulfilled and the stage could be built for the festival coming up.
WHAT ABOUT YOU?
What if it takes you longer or costs you more in order to see your goals through to live the life of your dreams?
Is it taking longer? Have you given up? Have you chosen to let your dream die or have you committed yourself to seeing it through no matter how long it takes or how much it may cost you?
It's up to  you. It's YOUR choice.
But, remember this: it's also YOUR dream, right?
Often the idea of "how big is your WHY?" is talked about. But, I have a different question for you: HOW BIG AND HOW STRONG IS YOUR COMMITMENT?
Think about it and either let it die or step up and strengthen your resolve to see it through.
You can do it. Will you?
As you consider your commitment, remember this:
"Make it an AWESOME day! (Who else is going to do it for you?)"
Mike
﻿

Posted by mspillman at 2:14 PM No comments: