The Need for FOCUS! 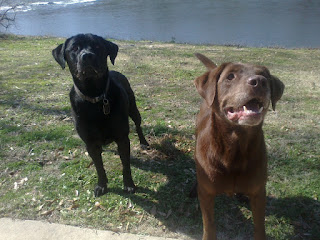 (Be sure to "LIKE" us on Facebook!)
My wife and I have had several "black labs" over the years and have always loved them. So, for me, when I took a little trip out on my motorcycle today and ended up at this park beside the river, I was quite pleased to be met by these two friendly fellows. As you can see, one is a black lab and the other is a chocolate lab and, as you can see, they were both quite attentive.
As I arrived they were "with" some people that were getting in their car and getting ready to leave the park and, at first, I thought they were leaving "their" dogs but I was wrong. I assume that they belonged to someone in the neighborhood and they were just really friendly and wanting to "play" with anyone and everyone that would pay them attention.
Now, before I talk about the dogs anymore at this point it may be best if I tell you WHY I was at the park and on my bike on this beautiful day.
Simply put - I NEEDED TO CLEAR MY HEAD!
Yup, that's right. Me. I needed to clear my head. You see, I have begun working with a new company and am currently in the process of developing my OWN part of this business as well as still having another new one in the background still awaiting my attention. Shoot, I even attended this company's National Convention about a week ago and saw MORE proof that I was in the right place at the right time and that this was DEFINITELY the right move for me.
As good as all of that is - I had a bad day yesterday and, to be honest, it messed with my head. Now, you know me, I'm a very positive guy and I like to keep my mind focused on these positive thoughts so that I can hurdle past these perceived roadblocks.
I wish I could say that this is always the case but, like many of you, it isn't always the case and, sometimes, that dreaded emotion of DOUBT tends to creep in and attempts to get me off my target.
It did (doubt did creep in) and it did (it did get me off of my target).
Today, when I woke up, I was still in that "funk" and I knew I had to get out, get some fresh air and just clear my head. So, I hopped on my motorcycle and went for a short ride to this park that is alongside a river to sit in the sun and the quiet and to allow myself to think clearly.
But the two guys in the picture had other ideas!
As soon as I arrived I noticed that the black lab was carrying a fairly large rock around in his mouth. As a matter of fact, I noticed that, if he dropped it, he had a bit of a hard time getting it back IN his mouth due to it's size and odd shape. When I sat down on a park bench the two of them came over to me and the black lab dropped the rock near me and then they both looked at me with expectant eyes as if to say, "Okay, c'mon...let's play!".

I couldn't help but notice how FOCUSED these dogs were (especially the black lab) and, I paid attention to the message that I felt was directed at me: "STAY FOCUSED - REGARDLESS!".

Here's what I particularly noticed...

The black lab was determined to bring back a rock! It may not be the same rock I threw, but regardless, he was going to bring back a rock. Now, don't get me wrong, he usually brought back the rock that I threw but, at times, the one I threw would go into the river and he couldn't find it. So, what did he do? Well, honestly, I was wondering this myself at times since he had gone down the bank and out of my sight when he would return with a different rock. And, here's the kicker, usually it was a rock at least 4 or 5 times BIGGER than the one I threw.

Why? I don't know. I guess it's the only one that he could find that was available!

That dog was FOCUSED on bringing me back a rock so that he could continue to play the game. And he did over and over again.

Here's another thing I noticed about their focus - they didn't really care to be petted or loved on! They basically didn't look me in the eyes. Why? Because they were FOCUSED on looking at that rock! In the picture above you can tell that they are not looking at me and, by now, you can figure out what they WERE looking at...that's right, the rock!

Another example of the focus of the black lab was shown when he would bring the rock back to me. At first the dog would set the rock down in the general area of where my feet were placed. I purposely would not pick it up to see what the dog would do. Without even looking up at me, when the dog realized that he was not getting the response desired, he would "kick" the rock closer to my feet. Yup, that's what he did. And, if even after doing that, if I still didn't pick the rock up, he'd kick it again until I actually leaned over and picked it up.

Stop making excuses! ("I can't find THAT rock...the rock is too big...you threw it too far...it went in the water...you're expecting me to do it your way...I'm not doing anything else besides what I've already done. I mean, hey, what do you want??")

It's easy to get distracted and discouraged. It's easy to get frustrated and to allow all of the "junk" that surrounds us every day to "mess with your head" if you let it.

The lesson I learned - and badly needed - today was simply this: