Have you ever had a stump in your yard that you needed removed?
Now, I understand that, depending on where you live, this may not be something that has ever concerned you. But, for those of us that live in more rural areas, it's a fairly common occurrence.
There are several reasons that someone may end up with a stump in their yard or on their property. Someone may decide to clear out some trees and, instead of using a bulldozer to remove the tree - including the stump and the roots - they cut them down with a chainsaw and leave the stump. Sometimes, a tree may be rotten and actually fall over or, to keep that from happening, may be cut as mentioned in the last example. Lightning could strike a tree and kill it, which would require the tree - and stump - to be removed. There are many reasons but still one problem - THE STUMP!
There are almost as many "solutions" to this problem as there are reasons for it's existence in the first place. Some try to burn the stump in order to remove it. This takes a very long time, if it works at all. Remember, there are roots under that stump that may run several feet deep and out in all directions! Some try different types of chemicals that are supposed to kill the stump, including the roots but, again, this usually takes quite a long time to actually happen. Others will either rent a "diamond-cut saw" or hire someone that owns one of these to "chip away" at the stump in order to remove it. But, again, the problem of the root still remains. One of the most entertaining ways is for someone to put a chain around the stump and hook it on the back of a pickup with plans of "yanking it out" of the ground. The pickup, more often than not, usually loses this battle and often ends up with some sort of damage.
But, I'd say THE most entertaining, the QUICKEST and most EFFECTIVE way to remove a stump is to use some dynamite and simply BLOW THAT SUCKER UP! That's right...blow it up and remove it all at once.
So, what is it in YOUR life that has you "stumped"? What is it that is holding you back and preventing you from making the progress that you have planned for your life?
How long has this been going on? How long have you been attempting to "chip away" or try to resolve this issue by "attacking it" (not sure that this is really a true attack when approached this way) a little at a time?
Chances are - if you are really honest with yourself - you KNOW what the problem is...you just may not want to admit it to anyone else. You may not even like to admit it to yourself, but you probably really know what it is.
Are you ready to, once and for all, "blow that sucker up" and remove it from your life? Hey listen, be sure to take a few minutes to listen to the podcast that goes along with this, o.k.? Seriously, you need to listen to it and be encouraged. (Just click one of the podcast links at the bottom).
Here's a few quotes from some graphics that I've posted on the FYU Fan Page over the past few days that may be of some encouragement to you in this process. This first is from Mark Cuban: 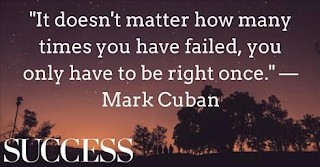 Here's another, from Dave Ramsey, that basically sums up that definition of "insanity" (doing the same thing over and over again and expecting different results): 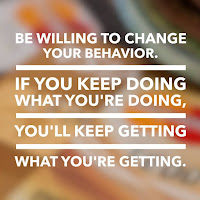 Then, here's this quote from Robert Allen: "Everything you want is just outside your comfort zone."

And, finally, this one from SUCCESS Magazine... 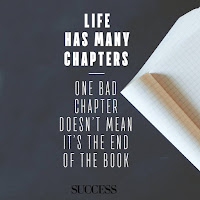 Take heart, friend! Don't give up! Do whatever it is you have to do to finally get past whatever it is that has you "stumped" and then move forward - WITH CONFIDENCE - knowing that you are moving close and closer to your goals and dreams!

Let me know if I can be of assistance and, until next time, whatever you do, always be sure to...

Future You University   FYU on Facebook!   Podcast on iTunes   Podcast RSS feed
Posted by mspillman at 12:24 PM No comments:

Getting Rid of the FAT...NOT So Easy 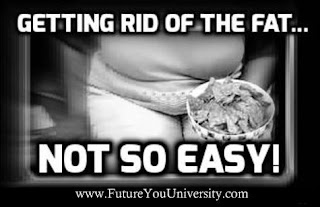 If you haven't done so, be sure to go back and read the last blog article. It leads into this article and should be read first, o.k.?
Too, be sure to listen to the podcast that goes along with this article - just click on either of the "podcast links" at the bottom of this article and you'll be taken right to it. Too, please be sure to share this blog and podcast with as many people as you can. Thanks, in advance!
Pretty much everyone would agree that, even though it is EASY to put on weight and even "get fat" it is quite a different story when it comes to LOSING that weight and trying to GET and STAY "in shape". (I hear those of you out there that are saying, "Hey, round IS a shape!").
Again, based on what was discussed in the last article, let's get to it and acknowledge the fact that, the longer you take the path of least resistance then the harder it is going to be to make a change and move in the opposite direction! This goes for ANYTHING that has come about by taking this path. The further you go down that path, the further it is back to where you want to be or where you need to be - in ANY area. Make sense?
Let's use this example that I've used several times before - the ship and the jet ski. Both of them can turn around and head in the opposite direction, right? Sure it's right! Which one can do it quicker and with less effort? The jet ski, of course. It's smaller and lighter and can just about "turn on a dime" Now then, on the other hand, that ship is going to take a bit more time and a bit more effort to get it headed back in the opposite direction. Why? Because it is so much larger and heavier. So it is with what we allow to grow larger and larger (not just talking about our belly here, friend!) by taking the path of least resistance.
But don't miss this point: No matter how "big" and "hard" that task may seem - it CAN be done! Yes, it's going to take longer and yes, it's going to take more effort but - let's get real here - how bad do you want it?
Years ago I lost 100 pounds over 13 months and I had a lot of people that wanted to know my "secret" and do what I did to lose that weight and get in shape. But, you know what? Although a lot of people SAID that they wanted to "do whatever it would take", not many were really willing to do so. A lot of people want the RESULTS (this can apply to "success" in many forms) but aren't willing to do what it takes to GET those results.
A mentor that I had in that weight loss business that was part of my "formula for success" was very successful in the business aspect of this company. He said that many people would tell him that they wanted to be where he was in this company and he would ask them - straight out - "But are you willing to do what I have had to do to get here?". Many would automatically say, "Yes!" when, in reality, they were not willing to do those things.
Another gentleman that I knew - a multi-millionaire in an insurance company that I worked with - was well known in this company due to his success. I attended a convention that had several people speak from within the company. When they got on the stage they would begin by telling everyone what they did to accomplish what they had accomplished. When this one particular gentleman got up to speak he said, "I'm not even going to tell you what I did because none of you would be willing to do what I did!" And, you know what? He was right. I found out what he did to get his business taking off at such a great pace and, friend, it was literally CRAZY! But he did it because he wanted it that bad. Many wanted his success but few - if any - were willing to do what he had done to get there.
Friend, it takes DISCIPLINE to "get rid of the fat" and to go the opposite way of the many that are on that path of least resistance. It takes DISCIPLINE to keep going when you feel like giving up - especially if you are trying to redirect a SHIP instead of a jet ski. Get the point?
No one can do it for you. You may want them to at times but, remember, getting others to do it for you is following the path of least resistance. Oh, there's nothing wrong with getting someone to help from time to time but, you can't expect (nor should you want) someone else to do the needed things for you.
Remember, even if you take "two steps forward and one step back" you are still one step ahead of where you were before! Easier said than done? Well, of course it is! The work goes beyond the words - the work comes in the ACTION that only you can do. I hope that this article encourages you along that path (as well as the other podcasts and articles) and that you will share your thoughts and progress with me. Will you? I hope so! I'd especially love to hear from you via the FYU page on Facebook﻿

Until next time, as you make the daily decision to keep on working towards a better future, always be sure to...

Future You University  FYU on Facebook!  Podcast on iTunes   Podcast RSS feed
Posted by mspillman at 10:20 PM No comments:

As Easy As Getting FAT 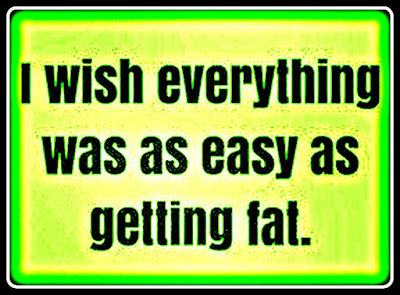 Future You University   FYU on Facebook!   Podcast on iTunes   Podcast RSS feed
﻿
Posted by mspillman at 3:19 PM No comments: