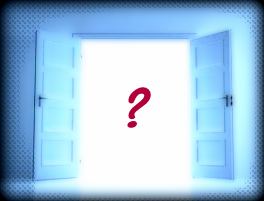 Notice that the RSS Feed AND the iTunes podcast links have changed (11.1.21)!
Click on the links at the bottom of the blog to access the new information.

As always, be sure to read the previous articles in this series as well as listening to the podcasts that go along with this topic. As is pointed out above, be sure to notice that the iTunes and RSS feed have been updated in the links at the end of this article.

In today's article, I conclude this series that with "part 2" of the "final step" in the "Asking, Seeking, Knocking" formula that comes from Matthew 7: 7-8.

In the last article I discussed about WHY you have decided to "knock" on THAT particular door after the "seeking" part of this process. Again, be sure to go back and read it...it's very important to consider. I also left you with the following scriptures to think about leading into today's article about what you do once that "door" has been "opened" and you have discovered the answer for which you have sought.

The Parable of the Hidden Treasure
44 “Again, the kingdom of heaven is like treasure hidden in a field, which a man found and hid; and for joy over it he goes and sells all that he has and buys that field.
The Parable of the Pearl of Great Price
45 “Again, the kingdom of heaven is like a merchant seeking beautiful pearls, 46 who, when he had found one pearl of great price, went and sold all that he had and bought it."
Now that you have found what you say you were looking for - that "thing" for which you have intently searched - what will you do now?

In the scriptures that I shared with you above, you see that - in BOTH situations - when the person that was doing the SEEKING/SEARCHING found that for which they searched (vs. 44 does not indicate an actual "search" but does indicate one that realized the value of what was found) they acted according to the VALUE that they perceived that "thing for which they searched" held. In BOTH of these situations, they sold ALL THAT THEY HAD so that they could buy that "treasure"! WOW!

We have already discovered TWO WAYS for you (or anyone paying attention to what you are doing or saying) to KNOW how truly valuable that "treasure" is for which you seek. You see, SAYING it or TALKING about it is one thing but the ACTION that follows actually speaks the TRUTH about the matter!

1. How intently your actually SEEK that for which you SAY you desire. Again, your ACTIONS will speak much louder than your WORDS.

2. What you actually do once you have "found" that "treasure" for which you seek. What ACTION will you take now that you have found it? What VALUE do you place on that "treasure"?

There are times that people SAY that they want or desire something only - once they have discovered the "cost" - to later decide that they really DIDN'T want it.

But, for those that have shown, from the beginning of their "seeking", that their "WHY" is, indeed, of great importance to them they also demonstrate the same once they have found their "treasure"! They will not give a second thought to whatever "cost" may be attached to that "treasure" because THIS is THE THING for which they have been searching. They have not ever given up or stopped seeking! They KEPT ON SEEKING even when others may have told them to give up.

Which describes YOU and that "thing" for which you say you are willing to do WHATEVER IT TAKES to achieve or obtain? Again, your ACTIONS will answer that question regardless of what you may say with your words.

I appreciate you taking the time to read this blog article. I began these back in 2009 and, though I've had some set-backs from time to time, I still continue to try to encourage those who read them as well as those that listen to my podcasts.

Be sure to stop by my Facebook page and leave your comments about this article or, better yet, this series that I conclude with this entry. I'd love to hear from you.

Until next time, remember, YOU'RE HERE FOR A REASON and, whatever you do, always be sure to...